Tennis is a plain-trick game in which two players strive to match a bid number of tricks exactly for each of their two hands.

Tennis uses a standard 52-card deck, with cards ranked from ace (high) to 2 (low). Suits have no rank, but for each round of play (called a game) a different suit may be trump. For the first game, clubs are trump; then diamonds, hearts, spades, and notrump. Playing five games this way is a set. A complete match consists of exactly two sets, enabling each player to be both dealer and non-dealer for each trump possibility.

Dealer then deals the remaining cards, forming each player’s Forehand. The bidding process is repeated, with the Forehand bid placed vertically atop the Backhand bid. Here’s how the table will look: 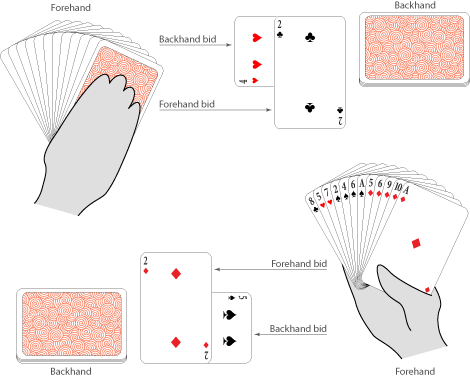 Non-dealer serves by leading any card from Forehand. Dealer then plays from Forehand, following suit if possible and playing any card if not. Both players then put the Forehands face-down vertically on the table and pick up the Backhands. Non-dealer plays from Backhand, again following suit if possible, as does dealer. The trick is now complete, and the highest card of the suit led, or the highest trump, wins the trick.

Whichever player won the trick collects it and places it face-down behind the bids. The trick should be placed vertically if Forehand won, and horizontally if Backhand won. The winner then plays any card from the hand that won the previous trick. The next player follows to the trick from the same kind of hand (Forehand or Backhand), then both players put those hands face-down and complete the trick by playing a card, in order, from the remaining hands. Note that each player may look at only one hand at a time.

Play continues in this back-and-forth fashion, much like a volley of tennis, until all 12 tricks have been played. Below is an example of how the table might look halfway through the game depicted in the first diagram: 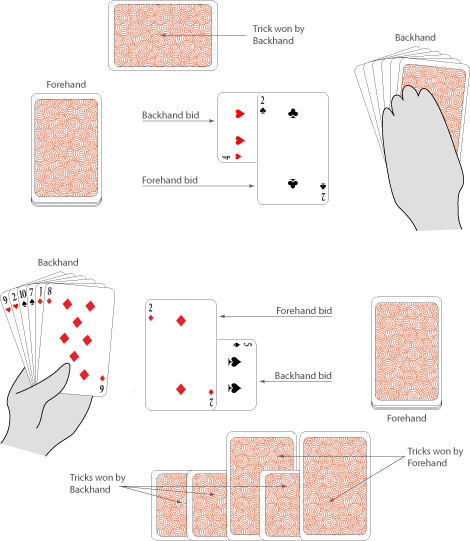 After each game, players count their errors (see below). Dealer alternates with each game. At the end of the match, the player with the fewest errors wins.

A player who makes both Forehand and Backhand bids exactly has made no errors and scores nothing. Otherwise, players score 1 error for every trick by which either hand misses its bid.